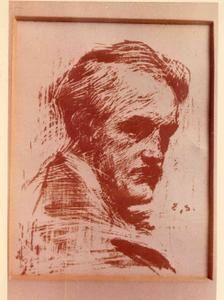 As to the technique of the work, we are able to omit going into details as an original plate and numerous reproductions accompany the present text. Achener draws directly on the copper from nature, the rustic  perpectives or villagers which he has prepared to interpret. Often he makes first a small sketch to determine the principal lines of a subject. At other times when the extend and variety scheme require, the sketch is more detailed; the values are studied more thoroughly. This rigorous study of perspective is one of the masterly qualities of etcher. He attains by this to that precision of atmosphere, to that feeling of space which characterizes all his work: it is so true that all poetry is born of a patient labour. If he confines himself to the essential in is work of preparation, Achener never leaves a plate until he given and minute consideration to the mise au point. And the pulling of the proofs, he confides to the care of no other, which is responsible for a notable part in the final result. He has for his profession the same veneration as for his art. It is b the views of the Geneva country already mentioned and by a fine series consecrated to Etampes, a pretty little villa in the suburbs of Paris that we may judge of the present expression of the art of Achener. As his evolution progresses we see him turn more to simplicity,. He shows more tone, he is sincere but more wilful, also sensitive but less subjective. The picturesque element is subordinated, the effect aimed as is discrete and at the same time imperious.  The artist does not content himself to suggest emotion, he become more ardent; yesterday he analyzed; now he suggests, he wishes to conquer. It is possible that these new tendencies remain unobserved among certain categories of collectors, who may regret the plates of effect, the decorative pictures of former times; at any rate they will enjoy the selection of the elite, and that is the essential, since Achener’s aim has always been to produce work which would appeal to the elite