In 1908 Achener came to Paris, and here, as in his own country, is still drawn to that which attracted him from the first the irregular outlines of the old buildings, the savoury color of the stones slowly weathered by the sun and rain of centuries, in other words the picturesque. To loosen this tendency, to give the proper aspect to his work, the severity and the hardness of the North needed the infusion of Latin cheerfulness. The warmth and serenity of the South were wanted .Italy was necessary. He arrived there the first time in 1910 and a once there a revelation. At the contact with these aspects, new to him, of nature and civilization, his perceptions asserted and multiplied themselves; his spirit became free from its timidity from the first influence received. He burned with an enthusiasm, new and free, with a young and virile ardour for the eternal beauties which appeared to him. From that tile on he tried, he dared he succeeded. His composition fell into order, showed development, acquired ease and brilliancy.

Scarcely had he had the time to catch a glimpse of what Italy had in store for him than Venice with its imperial charmed attracted him. It is however as a “flaneur” that he repaired there, stopping at Brescia, Verona and ”, from whence he dates some interesting notes in sketches of their monuments-bathed in that indescribable atmosphere full of tenderness, showing the power to grasp, and what is better, to express.

Finally he is at Venice. He etched here as early as that first year, eleven plates, notably le Pont des Saints Apôtres, la Fondamentea Nuove,  de Saint-Jean Evangeliste and the façade of Vieux Palais reproduced here, in which the ruin retain a smiling nobility behind the wreathed palli. From that time his talent is marked by Italy. He returned the year following to revisits Brescia, Vincenza, Verona. Later he remained a long time at Florence and visited Sicily, bringing back from Palermo and Girgenti many significant plates. Each halting place seems to hold in reserve for him a voluptuous intoxication of production. His thought became fused with the happy harmony which created all about him that powerful light without violence, that architecture of such ordered elegance, that wonderfully decorative vegetation. He created in joy! What more dazzling remembrance than that remembrance that of a morning spent before the ramparts of Sclaligieri at Verona! 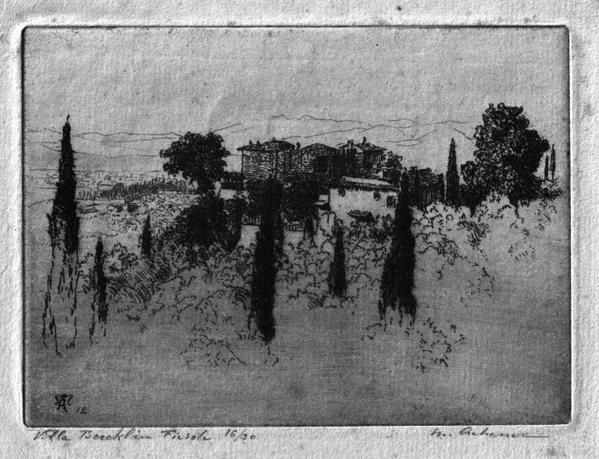 Certainly this talent is subjective, but how well it expresses, how it excels in fixing forever the emotion of an hour. No better example of this could be given than that one of his plates, the view An werp (?), impregnated with the melancholy austerity of the North. This date, like the preceding one of 1911 shows that the impress left by Italy on the mind of Achener did not turn him, asides from working under other skies. The South had not held him entirely : often he returned to Alsace, and he also worked a good deal in, Paris, and Switzerland both before and after the war.

But to return to the Italians plates (of which there are no less than forty-six) beside the Venitian Series one should note the importance and the interest of the Florentine Series which include several plates of the first order, such as the panorama of La Certosa, views in which the penetrating lights is cleverly graduated, the luminous Descente de Fiesole, or the noble and sober Or San Michele.